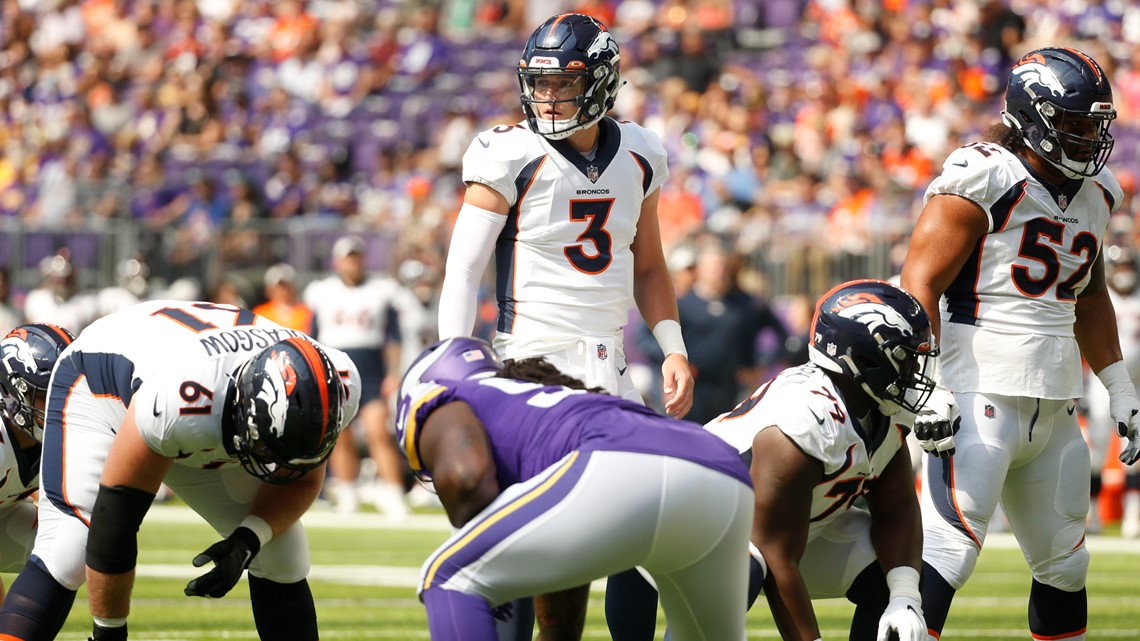 First-round corner Pat Surtain II comes up with 30-yard pick six as the game couldn’t have gone much better for Broncos.

MINNEAPOLIS — They threatened to take Drew Lock’s job away.

The Broncos’ bosses didn’t state it that way, of course. Just adding some competition is all, Drew. Nothing personal.

Lock sent a strong message back to his bosses, teammates and fans here Saturday afternoon in the Broncos’ preseason opener against the Minnesota Vikings.

Lock was terrific, completing 5 of 7 passes for 151 yards and two touchdowns without an interception in a little more than one quarter of work. His passer rating was 153.3 while helping the Broncos rout the Vikings, 33-6, at U.S. Bank Stadium, a sun-splashed, indoor venue.

Lock’s chief competitor, Teddy Bridgewater, entered the game in a huge hole to Lock’s fine performance but answered impressively. In two drives, Bridgewater led the Broncos to 10 points — and he had a 12-yard touchdown scramble called back by penalty before settling for the field goal.

A reminder that this year’s Super Bowl won’t be played until the second week of February this season, not the first.

“I thought they both played very well,” said Broncos head coach Vic Fangio. “Kind of validated what I’ve been saying all camp that they’re even-steven. … I don’t think any separation happened today in this game if anybody’s looking for it.”

Everybody is looking for it, coach. but Broncos Country will have to wait at least one more week. The Broncos play preseason game No. 2 next Saturday at Seattle. Bridgewater will get the start against the Seahawks. Lock will follow.

It was 23-3 Broncos against the second-string Vikings when Lock was lifted early in the second quarter.

“I’m thrilled both of them played good,” Fangio said. “I want it to be a hard decision, not an easy one. … I hope they both have great games next week.” 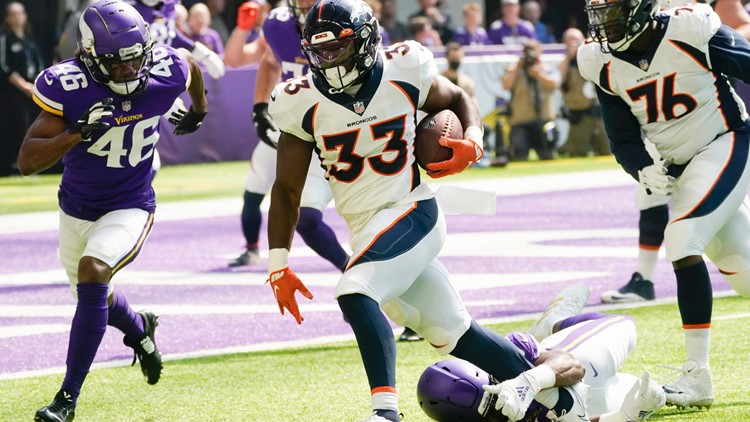 “Poor performance today,” Zimmer said. “That’s what happens when you give up an 80-yard pass, a long kickoff return. You had three defensive offsides on third downs, interception for a touchdown, a safety for holding in the end zone, three very poor punts. Just really disappointed with the guys have played today.”

“I definitely had butterflies because it was my first game,” Williams said. “Just the first couple plays got my confidence back up and made it feel like football again.

Lock threw a beautiful 80-yard touchdown to the speedy Hamler on the first play of his second series and later finished a long, sustained drive by flipping a 4-yard touchdown pass to Trinity Benson.

“I would say, ‘happier,”’ Lock said when asked if he was happy or relieved by his performance. “Absolutely, happier. It feels good to be able to put the points up when you’re in there. You are able to come in the locker room, high five and celebrate a little bit, especially after a win. Especially after everybody played — I thought it was an awesome showing from everybody.”

Two days earlier, during a joint practice against the Vikings, Lock overthrew a wide-open Hamler on a similar pattern. Lock learned from it and put a little more air under the ball this time. It landed softly in Hamler’s arms, who caught it in stride.

In his three offensive series, Lock led the Broncos to two touchdowns and the other ended on downs at the Vikings’ 2-yard line after a 67-yard drive. The Broncos did score a touchdown on that opening drive, but Williams’ 4-yard touchdown run was called back because of a holding penalty on Jeudy.

Entering the preseason opener, Lock may have been trailing Bridgewater in the Broncos’ quarterback competition. Lock was about to use his big day to take a slight lead — until Bridgewater showed he, too, is highly efficient.

“I said this days ago, weeks ago, when I’m out there I’m not even thinking about the competition,” Bridgewater said. “It’s, ‘how can I maximize this one play?’ There’s 10 other guys out there on the field competing to earn a spot on the team. If I make it about me in that moment, then I’m hurting the team.”

Bridgewater got a warm ovation from the Vikings’ crowd when he entered the game — he was a fan favorite here in 2014-15 and his comeback from a near catastrophic knee injury warms the hearts of football fans everywhere — and finished 7 of 8 passing for 74 yards with his own 4-yard touchdown pass to Benson, and a 144.8 passer rating.

Lock is the incumbent as he’s been the Broncos’ starting quarterback since game 12 of 2019 season. But an erratic 2020 in which the Broncos finished with a 5-11 record and Lock tied for the league-lead with 15 interceptions caused new general George Paton and Fangio to bring in the experienced Bridgewater to compete with Lock. Or to put another way, threaten to give his starting job to someone else.

Lock, though, did not shrink from competition. And neither did Bridgewater. 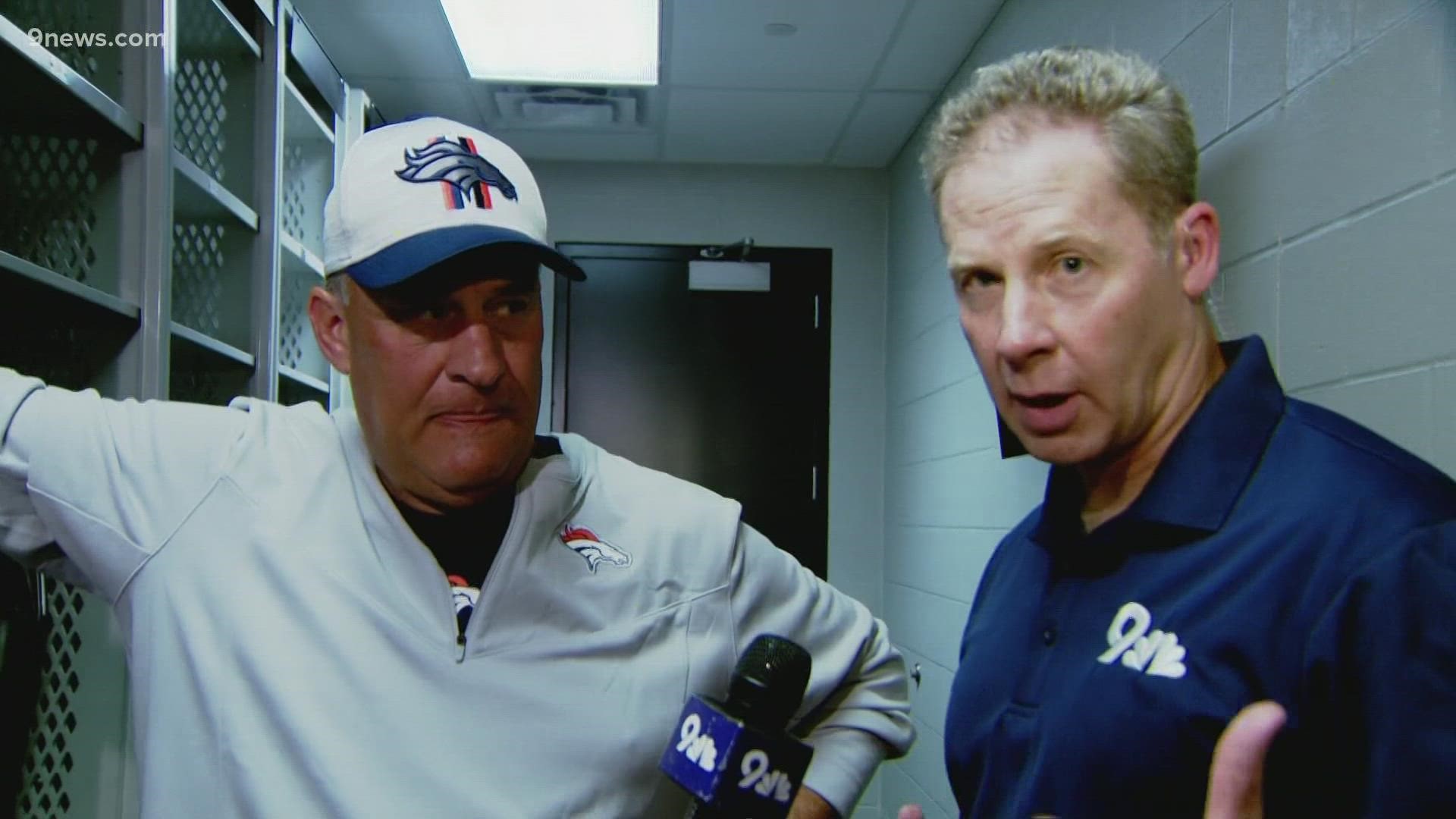 The first-half also provided a showcase moment for Surtain, who was taken with the Broncos’ No. 9 overall draft pick when some fans and media wanted Paton to take quarterback Justin Fields. While Fields had an impressive debut with the Bears, Surtain answered by cutting underneath a sideline pattern and running untouched to the end zone.

“I felt it coming,” said Surtain, who played outside left cornerback. “It was the same route concept from the drive before. I expected it. I just made a play on the ball.”

Bridgewater entered the game in the second quarter with his team up 23-3 and drove the Broncos down for a field goal. He then opened the second half with a seven-play, 40-yard touchdown drive that was set up by Levante Bellamy’s 62-yard kickoff return.

Bridgewater got 17 plays in two series to Lock’s 19 plays over three series. No. 3 quarterback Brett Rypien came in late in the third quarter to finish the game. He started at his own 2 yard line and helped lead the Broncos out to the 34-yard line before the drive stalled. Rypien completed two passes for 27 yards in mop-up duty.

Hamler had two catches for 105 yards and a touchdown while Benson, who has been on the Broncos’ practice squad the previous two years, had four catches for 36 yards and two touchdowns.

After the game, Fangio gave a Broncos’ T-shirt — the preseason equivalent to a game ball — to general manager George Paton, who spent the previous 14 years as the Vikings’ assistant general manager. Paton, whose offseason moves and thoughtful manner have brought hope of better days ahead, received a rousing ovation from the players and the coaches in the locker room.

The Broncos and their Great Quarterback Competition now moves to Seattle.

Injuries included safety Trey Marshall, who suffered an ankle while making a tackle on the opening kickoff, and Bellamy, who came up limping with an ankle injury after his long kickoff return. …

There was one sack in the game and it was Broncos’ undrafted rookie Andre Mintze who got it. …

The Broncos are off Sunday. They finish up training camp with practices Monday through Thursday, then fly Friday to Seattle. Monday’s practice is not open to the public.

MORE WAYS TO GET 9NEWS

HOW TO ADD THE 9NEWS APP TO YOUR STREAMING DEVICE

ROKU: add the channel from the ROKU store or by searching for KUSA.

For both Apple TV and Fire TV, search for “9news” to find the free app to add to your account. Another option for Fire TV is to have the app delivered directly to your Fire TV through Amazon.

The Benefits of Vinyl Printing on Fabric