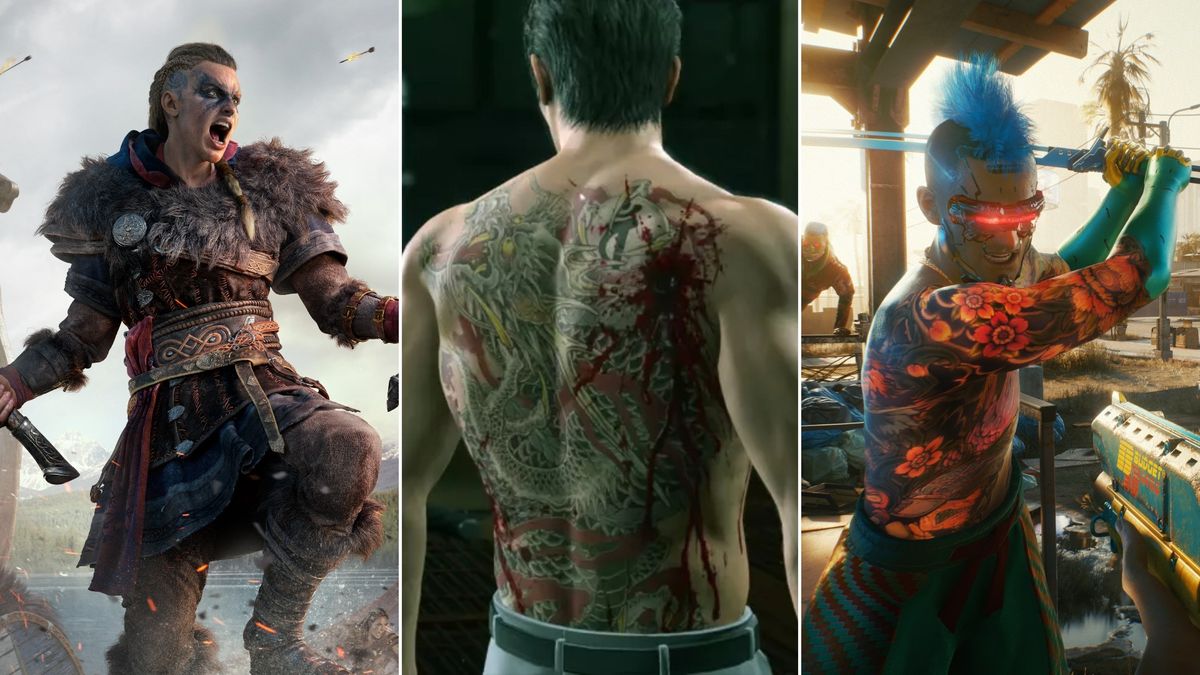 Tattoos in video games are tricky. When done right, they add an extra layer of immersion to a game world. When done wrong, they can feel jarringly out of sync with either the game’s art style or the tattooed character in question. Tattoos are powerful visual markers that can help tell stories and build worlds, which is why they can be especially powerful in video games.

Recent advances in both game development technology and platform processing power allow tattoos to be more detailed and realistic than ever. That’s a huge part of the reason why games like Assassin’s Creed Valhalla and Cyberpunk 2077 have such beautiful, intricate, and realistic ink. But it’s not just improved visuals that make a good game tattoo.

As evidenced by the beautiful Japanese traditional tattoos designed for the Yakuza series by legendary tattoo artist Horitomo, a keen understanding of tattoo culture and the process of tattooing can make video game tattoos standout pieces of art and worldbuilding, whether it offers in-depth character backgrounds, customization options, or immersion by way of ink. The three games highlighted here are setting new standards when it comes to in-game tattoos.

Variety and attention to detail are crucial when creating an immersive game, particularly one that lets you customize your characters with tattoos. With a world as vast as Cyberpunk 2077, CD Projekt Red had their work cut out for them. Cyberpunk 2077 has some of the best variety of video game tattoos, with multiple genres of ink represented – including traditional Japanese tattoos and the red-and-black sticker book motif seen on Judy Alvarez.

“In the world of Night City, personal style is extremely important,” says Waldek Kamiński, senior concept artist at CD Projekt Red. “There is room for a ton of badass designs in many different styles, so while creating new tattoos I could constantly be asking myself ‘Is this cool? Would someone like or choose to have a tattoo like this?'”

Those questions help make the world of Night City feel more rich and lived-in, as its occupants’ tattoos are a direct reflection of the society Cyberpunk 2077 is trying to depict. “You have to be asking yourself a number of important questions to help guide the design from start to finish: ‘Where is the tattoo gonna be on the body? Why did this NPC decide to have this tattoo? How will the player react to seeing this in-game? What will they think about this character when they do see it? Does this tattoo fit the character’s personality? Is this cool? Does this design fit the style/art direction of the game?’ and so on,” Kamiński explains. “I think, most importantly, you need to make sure that whatever you create fits the game world, and the character you’re designing the ink for. It needs to feel like a natural fit.”

That thought process is carried all throughout Cyberpunk 2077, from the lowly NPCs that occupy Night City’s streets to powerful allies such as Judy Alvarez. In the case of Alvarez, CDPR wanted her tattoos to be meaningful – to not only give you a sense of her place in the world, but an idea of who she was before she befriended V. “First, we decided what style of tattoos would be the best fit for her – scattered around the body, only two colors, etc. Second, we took her background as a diver and made sure that was reflected in her ink through a sea motif, including a shark and some seahorses,” says Kamiński. “Judy is a really mysterious character, especially when you first meet her. V needs to spend time with her to learn about her past, her ideals, who she is as a person, so I wanted to transmit that air of mystery in her tattoos, too.”

Where CDPR used ink as a way of immersing you in the world of Night City and to reflect the broad nature of body modification in Cyberpunk 2077, Ubisoft Montreal was faced with a different challenge. In Assassin’s Creed Valhalla, an impressive selection of Viking-style tattoos was introduced to help players craft their own version of Eivor. While these were well-received by fans, the designs almost didn’t make it into the final game. During production, Ubisoft tried desperately to find historical evidence that Vikings even had tattoos. It was only when the team discovered an account from Muslim historian Ahmad ibn Fadlan, that spoke of a Scandinavian people covered in markings, that the Assassin’s Creed Valhalla team was able to continue their tattoo design work.

“The markings were very interlaced designs, Celtic patterns, the kind where if you look at it too much your head’s gonna explode,” says Nicolas Rivard, art director for visual conception at Ubisoft Montreal. “I did some of those, I was throwing some challenges to myself, making mood boards and briefs for more talented people who can do real illustration. I tried to do an interlaced pattern and oh boy, man, I had my painkiller bottle next to me.”

Along with the complex interlaced designs seen in historical Viking carvings and artwork, the team drew inspiration from animals, which were also heavily represented in art from that time period. “The crows, the wolves, even some legendary creatures. We had very good information, so we went with that. The first tattoo designs were as close as possible to that benchmark and those guidelines,” Rivard says, before explaining that this was only the beginning of the process. “We want our players to have more than enough to choose from, a lot of our player base love cosplaying as their character, or dressing their character up and going to explore. I don’t know if you saw the pictures that came from the community… it’s insane, man. So we wanted them to have more tattoos.”

That’s why you’ll see that some of Eivor’s available tattoos look like body paint or runes, rather than what is considered to be more traditional Viking tattoos. It’s also why Ubisoft is still adding more tattoo options long after launch, including several that were designed by fans. By offering players a chance to decorate their Eivor in (mostly) historically accurate ink, Ubisoft gives players myriad options in terms of expression. “Adding as much choice as possible for customizing your character enhances the roleplay aspect. Roleplay for us means immersion, and immersion is what makes a game great,” says Rivard. “The settlement is your home, you can customize your gear, your ship, your horse, and your mount. But the tattoos feel really personal… you’re really in communion with the character, putting those tattoos on and seeing the results. People hide their hard-earned armor sets so you see their tattoos!”

The tattoos in the Yakuza series not only help establish the setting, but add a layer of unspoken development to its characters. Yakuza features some of the most impressive tattoo work I’ve ever seen in games, and that’s because Sega was smart enough to get a man named Horitomo involved. Horitomo is a legendary tattoo artist based in California who specializes in traditional Japanese tattoos called tebori, where tattoos are applied by hand using needles fastened to bamboo sticks.

Before Horitomo came to America, he was doing traditional Japanese tattoos in Yokohama – it was there that he was approached by two producers from Sega. “They asked me to design a tattoo for a game character. They had read an interview I had done for a tattoo magazine and were impressed that I was a Japanese tattoo artist who was studying traditional Japanese tattoos, instead of western styles which were wildly popular in Japan at the time. It was rare to find a tattoo artist studying the traditions of the Japanese tattoo. I guess that impressed them,” says Horitomo, who has designed pieces for Kazuma Kiryu, Akira Nishikiyama, and Yakuza Like a Dragon lead, Ichiban Kasuga, among many others.

Japanese tattoos often depict symbols from woodblock prints, like tigers, koi carp, oni, ghosts, cherry blossoms, and more. Japanese tattoos are incredibly meaningful and often tell a story about the tattooed person in question. So, when it came to designing Ichiban Kasuga’s tattoo, Horitomo proposed a Ryugyo design. “A picture of the fish on its way to becoming a dragon,” he explains. “I felt that it was the perfect motif for that character based on his backstory.”

That level of realism and consideration isn’t just in the design of the tattoos but extends to the tattooing process depicted in the Yakuza series. In Yakuza 0, both Kazuma Kiryu and Akira Nishikiyama have sujibori – the black outlines of tattoos that will eventually be completely colored in. Both their stories and their tattoos are in their infancy, so this design choice tells a clear character story. And the presence of sujibori instead of a completely finished tattoo is also a realistic representation of the Japanese tattooing process. “Traditional Japanese tattoos cover large areas of the body, sometimes the whole body. This cannot be done in one sitting. It can take years to complete just one body part, such as the back where it starts at your shoulders and ends mid-thigh. Traditionally it is done by hand, as well,” Horitomo says. “So to keep with the immersive realism of the Yakuza game series, it only made sense to also make the tattoo progression realistic as well. I feel it really enhances the reality of the game.”

Tattoos can make or break a game’s sense of place. The ones highlighted here are prime examples of the storytelling and world-building power of well-researched and beautifully designed tattoos. Cyberpunk 2077’s tattoos help immerse you in the fictional Night City, Assassin’s Creed Valhalla’s ink lets players customize their own historically accurate Viking, and Yakuza’s ink provides detailed character backgrounds without saying a word. Video game tattoos can do a lot of narrative heavy lifting and fuel immersion. And they look damn cool while doing it.

Since you’ve got ink on the mind, check out the best tattoos in games.