Gray whales in peril: What are the whys and hows of their deaths? 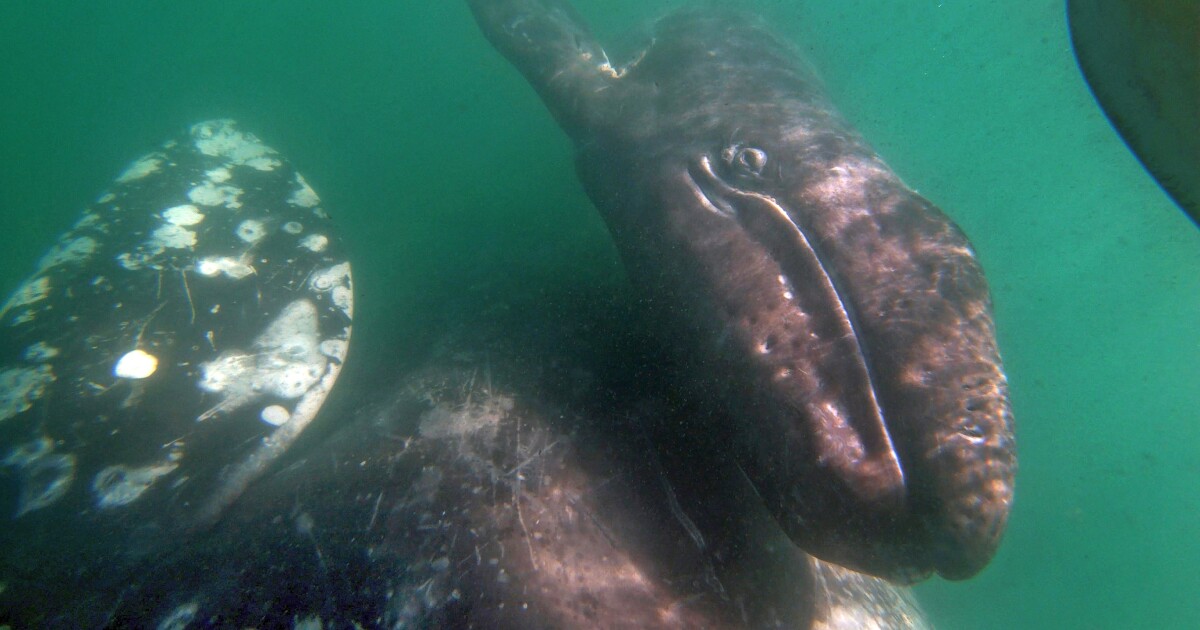 The mysterious die-off of California gray whales began at the end of 2018. Bodies of the mammoth mammals began washing up in the protected inlets of Mexico’s Baja California Peninsula.

But it was only the beginning of a terrible trend that could well bode ill for the whales, the ocean that sustains them, and the human beings who watch them in awe and wonder as they make their way up and down the Pacific Coast each year.

Times staff writer Susanne Rust and photographer Carolyn Cole set out to take a deeper look into the whales and their increasing distress. They decided to follow the massive creatures on their annual migration, starting at the southernmost point and making their way north.

“These whales are known as ‘California gray whales,’ so we not only felt a kinship, but a duty — as the state newspaper of note — to take a look at what was imperiling these iconic Golden State whales,” Rust said.

You know what they say about the best-laid plans, right?

“But after we landed in Loreto, Mexico, on March 5, 2020, nearly everything was upended,” Rust wrote in a companion piece to their lengthy investigation. “The coronavirus was rampaging worldwide. Cruise ships were the most visible spreaders.

“Carolyn and I aborted our plans to drive west, across the Baja Peninsula to see the whales — and instead drove more than 300 miles south to interview passengers disembarking from cruise ships pulling into Cabo San Lucas,” she wrote. “No one was wearing masks. Many seemed surprised and incredulous. And after a couple of days, we decided to head back north to the leviathan nursery.”

What Rust and Cole didn’t know was that the pandemic would stop their reporting, the scientific research planned to investigate the die-off and the tourist economies that spring from the giant beasts’ travels. But they persevered, and more than a year of effort finally paid off in a lengthy investigation published by The Times on Thursday, accompanied by heart-wrenching photos, video, and online design and graphics by Rahul Mukherjee and Jennifer Lu.

“Ocean and marine mammal biologists were prevented from congregating in boats,” Rust wrote in the piece. “They couldn’t directly study ocean and food conditions. Aerial survey missions were called off. Laboratories shut down and beaches were closed, limiting the number of scientists who could perform necropsies.

“Yet where the professionals had to pull back, amateurs — including retired experts and non-PhD observers — poured in. Dedicated whale watchers set out to observe the oceans and document, as best they could, the crisis off their coasts. They attempted to fill in knowledge gaps and, ultimately, recorded whale behaviors not previously documented or observed by scientists.”

Many things surprised Rust and Cole in their travels, during all the time they spent reporting and observing. The first, Rust said, was the incredible length of the whales’ migration.

“Can you imagine swimming from the Arctic to Baja and back, every year?” she said.

And then there’s the gantlet that faces the whales as they make their way up and back.

“Imagine commuting by foot to work every day and having 18-wheel trucks — that you can’t hear coming because the world you live in is so saturated with loud noises — come racing across the sidewalk at you,” she said. “And not just trucks and noise, but a top predator is lurking in the shadows, waiting for you and your kids to walk by so she can eat you. [That would be orcas.]

“Meanwhile, as you’re looking to make sure nothing is about to mow you down or attack you, you run into a net — which you can’t shake loose. And you’re breathing in foul air and everyone around you is getting sick. Finally: I couldn’t believe how close and personal people get with the whales in Baja. Seriously — hands in the blow hole? I had no idea.”

Photographing the whales gave Cole “a much greater appreciation for wildlife photographers,” she said: The lengths they must go to to find their subjects, the patience needed and the difficulty of the task. In Baja Mexico, where the two began their journey, she had to get permission from the government to photograph the whales. Scuba diving wasn’t allowed, so her underwater video was shot with a GoPro submerged off the side of a boat.

The project left her with mixed emotions.

“On the underwater photography, it was so special to see a mother whale pushing a baby whale to the surface so spectators in whale-watching boats could see the baby,” Cole said. “It also was distressing to see the emaciated whales at San Ignacio.”

Don’t miss their package of stories, video, still photographs and graphics, which can be found at the Times site here.

Note: Some of the sites we link to may limit the number of stories you can access without subscribing.

The massive Dixie fire destroyed much of one small town and threatens others. Greenville, nestled in dense forests southeast of Lake Almanor, saw huge losses late Wednesday when the brutal blaze swept through three weeks after it ignited near a Pacific Gas & Electric Co. power station in Feather River Canyon. Crews were still assessing the damage, but it’s believed three-quarters of the town’s buildings were consumed, fire spokeswoman Serena Baker said. At least 67 structures were destroyed, with more than 12,000 under threat, according to authorities. Los Angeles Times

As he watched workers clear an encampment in Stockton, Gov. Gavin Newsom defended his administration’s work on homelessness. In a rare extended interview with my colleague Benjamin Oreskes, Newsom applauded the removal of homeless camps from Echo Park Lake and Venice Beach in Los Angeles, staking out a position that reflects a change in the political dialogue on the contentious issue in California. It came as Newsom campaigns in a recall election in which homelessness has become a major issue. Los Angeles Times

Today is the last day to sign up for online school in the L.A. Unified School District. Here’s what you need to know: L.A. Unified is preparing to fully reopen campuses for in-person classes on Aug. 16. For parents who do not want to send their child back to campus, an online option is available through the district’s independent study program. Students will be automatically enrolled for in-person class at their school unless they register for independent study by Friday. Los Angeles Times

If you’re a fan of this newsletter, you’ll probably love our new daily podcast, “The Times,” hosted by columnist Gustavo Arellano, along with reporters from across our newsroom. Every weekday, it takes you beyond the headlines. Subscribe on Apple Podcasts and follow on Spotify.

Newsom is targeted over mask mandates and critical race theory during this week’s recall debate. Four Republicans who want to replace Gov. Gavin Newsom if he falls in the Sept. 14 recall election took turns blaming the governor for the state’s problems. The Wednesday night debate was peppered with pledges to end pandemic-related mask mandates, enact massive tax cuts, and abolish state and local sanctuary policies that offer protections for immigrants without legal status. Los Angeles Times

City halls are dealing with threats of violence at public meetings. In the wake of Jan. 6 — when some Southern California residents were part of a mob that beat police officers, threatened lawmakers and stormed the halls of Congress — there is widespread concern that violence is coming to the routine government gatherings that keep democracy running. A disturbing example played out at an Orange County Board of Supervisors meeting on July 27. Orange County Register

The sailor accused of starting a destructive ship fire was known for hating the Navy, investigators say. Just before a fire started on a warship that burned for nearly five days in San Diego Harbor last summer, a witness told investigators he saw a fellow sailor — known to his leadership for showing disdain toward the Navy — walking to the spot where the blaze first ignited. Washington Post

HEALTH AND THE ENVIRONMENT

Severe drought is forcing one of Sonoma’s best Syrah vineyards to stop making wine — at least for now. The grapevines at Griffin’s Lair Vineyard in Petaluma are parched, said owner John Flynn. They look haggard and weak, their leaves are already turning brown. With no water available to give them, Flynn decided to drop the entire crop, which in a good year would supply Pinot Noir and Syrah grapes to eight wineries, including Pax and Spottswoode. It’s the best way to ensure the crop’s survival, he said. San Francisco Chronicle

This Desert Hot Springs business has figured out how to sweeten the, ahem, pot to attract workers in a tight labor market. The business decided that “we are just going to ‘pay’ people in cannabis,” said Stephen Boyd, owner of Growpacker, a marijuana product packaging business. “Instead of a person thinking that they are making an extra dollar an hour … they are getting perceived value of $100 or $200 in cannabis savings.” Palm Springs Desert Sun

In a different kind of doobie news, the Doobie Brothers’ San Jose house is set to become an official landmark. The Craftsman-style home where the band got its start — and where some of its biggest hits were written — is poised to become a part of history. San Jose’s Historic Landmarks Commission voted unanimously late Wednesday to recommend that the City Council declare the building a historic city landmark. The council will make the final call in the coming weeks. Mercury News

Get our free daily crossword puzzle, sudoku, word search and arcade games in our new game center at latimes.com/games.

At 21, fresh from Arizona’s deserts, I flew into San Francisco International for my first big-city job. Riding into San Francisco along the Bayshore Freeway, I was captivated by the sweeping bay. What could this be? It was a beautiful day. The light danced and glinted on the gently lilting back of what appeared to be a magical, aqueous alien. Forty-five years later, having known the bay’s many moods — sometimes a slumbering, gray water-monster with heaving breath; sometimes a serene, silent listener; sometimes a lapping puppy leaving gifts of small sea treasures — the bay is still a mystery. It is no longer alien, but rather, a friend.

If you have a memory or story about the Golden State, share it with us. (Please keep your story to 100 words.)

Please let us know what we can do to make this newsletter more useful to you. Send comments to [email protected]