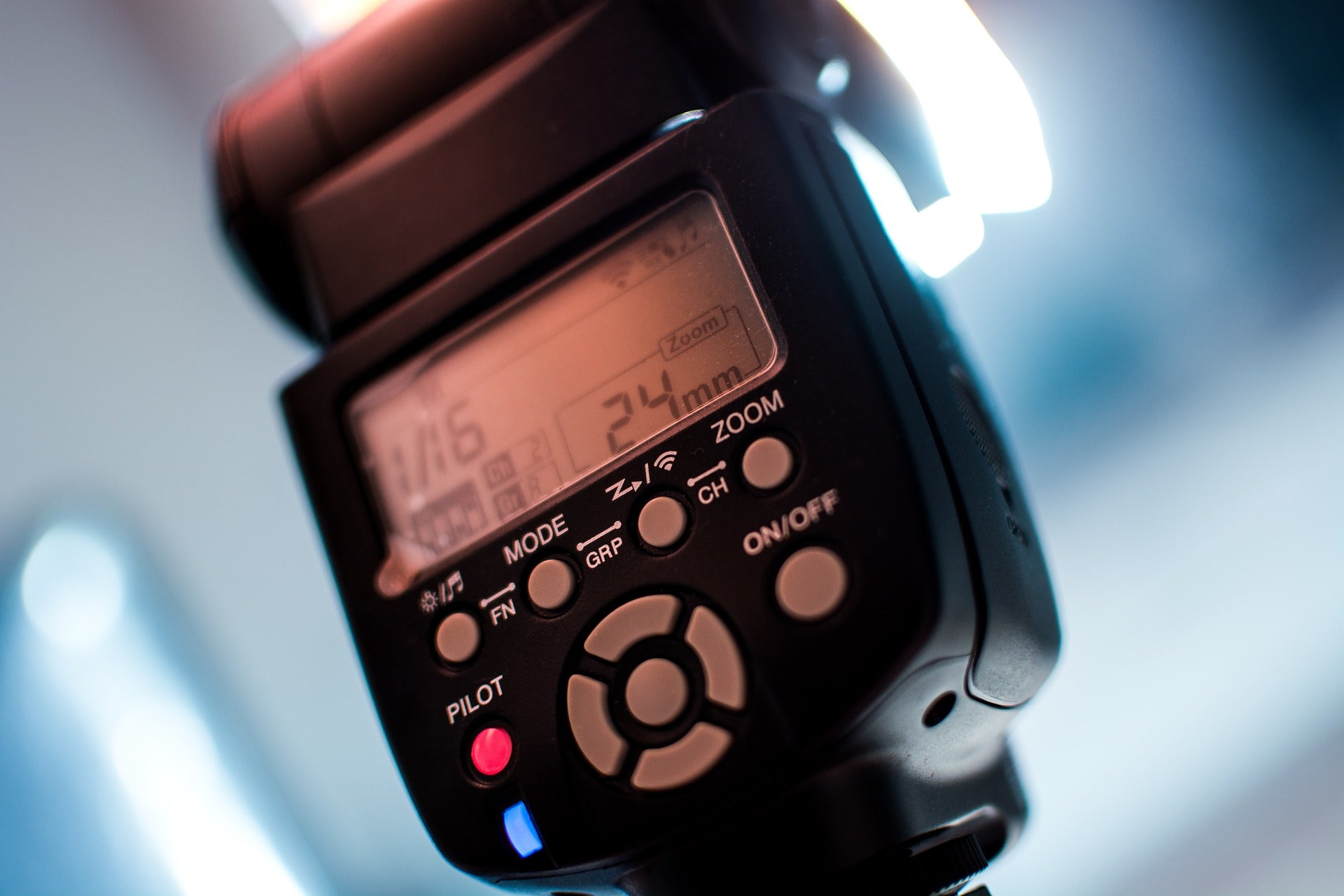 
A detachable camera flash, also known as a speedlite, can change the way you approach photography. It’s one of the first accessories many shooters buy, but it makes a huge difference. Although many entry-level cameras come with a built-in flash, if you’ve recently invested in a more pro-grade camera body you have probably noticed the lack of built-in flash. A detachable camera flash will give you more control and allow you to take more creative approaches to lighting. Once you’ve mastered a single flash, you can add more to your repertoire and start placing lights around the scene. It’s easy to get hooked.

Unlike built-in pop up flashes a detachable flash will allow you to control the intensity and angle of the light that is emitted from it. By simply turning the flash head around, you can bounce light off of the back wall or the ceiling. That creates a much softer, more flattering light in many cases than a direct blast. Wedding and event photographers can often rely entirely on a bounced flash to cover an entire room.

Detachable flashes are smaller and less expensive than studio strobes, making them a great lighting tool for bringing on location. Your camera’s built-in flash, on the other hand, typically won’t have enough power to compete with the sun in bright conditions.

Get the flash off of the camera

Transmitters will allow you to control multiple detachable flashes right from your camera. The flexibility makes them great for setting up low-cost portrait lighting solutions. With multiple strobes, you can light everything from dark interiors to bright exteriors shots that need strong fill.

Some flashes have transmitters built-in so you can use them to control other remote flashes within a certain range.

If you are planning to shoot with a detachable camera flash make sure to bring some extra batteries along. Many detachable flashes and transmitters run on multiple AA batteries. You can use rechargeable batteries to save money because lights typically chew through power quickly.

Even if you typically use rechargeables, it’s worth having a set of standard batteries in your bag, just in case you run out of rechargeable juice and need backups.

Some manufacturers offer flash units with rechargeable lithium-ion batteries. Those cells typically offer many pops per charge, but they cost more and typically aren’t as simple to swap.

Camera companies typically manufacture their own detachable camera flash systems designed to work with its own gear. Canon, Nikon, Sony and all the other big-name camera companies sell camera flashes that come in a variety of different power levels. Higher-end flashes typically offer faster recycle times, emit more light, and connect wirelessly over longer distances. A high-end flash will typically be a few hundred dollars more than a mid-range option.

If you are looking for a powerful speedlite, a third-party flash can be an appealing option. Godox is one of the most popular third-party brands for lighting equipment. You can often save even more money buying several units at a time. If you are planning to use a third-party flash make sure that you are purchasing the version that was designed to work with your camera and a compatible transmitter.

If money is no issue, a high-end third-party flash like the one made by Profoto might be what you are looking for. Profoto’s speedlight features a unique round flash head for light fall off that is similar to what you get with their high-end strobes and monolights. They’re powerful and create beautiful light with short flash durations, so they’re good for freezing action.

Canon’s midrange speedlite is an excellent choice for beginners. Canon

This is a great starter-speedlite. It offers a zoom flash head with coverage from 24-105mm and radio compatibility. The 430EX III-RT features a built-in catch light panel, a dot-matrix display, and a multi dial that makes it easy to operate on the go. It has a 6-stop range with increments as small as ⅓ of a step and has a recycling time of 0.1 to 3.7 seconds. If you are a Canon shooter who is just getting started with flash photography this is an excellent tool to add to your gear kit. You can add more Canon detachable camera flashes to the system down the line.

The SB-700 can be set up as a remote that can control other Nikon flashes, making it a great tool for photographers who want to explore off-camera flash photography. The Nikon SB-700 comes with filters for incandescent and fluorescent lighting situations. It offers three different illumination patterns to give photographers more control over the light output from the flash. In commander mode, the SB-700 can control off-camera flashes in two groups and one of four channels, plus features quick A:B ratio wireless control for speedy setups. The flash runs on four AA batteries and has a recycle time of 2.5-3.5 seconds.

Remotely fire up to 15 flashes at once. Sony

Sony’s flash has a 2.4 GHz radio transceiver that allows it to operate as a commander or a remote, it can support up to 15 flashes in five groups on one of 14 channels. It has full support for Sony’s metering system and is compatible with cameras across the Sony line. It has a recycle time of 1.7 sec, can fire up to 220 per fully charged set of batteries, and comes with green and amber color filters for balancing light. It features two memory settings so that users can save their setups and quickly pull them back up again.

This unit pricy unit mimics the look and performance of Profoto’s monolights and studio strobes. The A10 works with the Profoto app and Bluetooth technology for a button-free experience. Because it’s controlled through an app instead of a traditional trigger setup, it can work with any kind of camera. The round flash head gives users a natural light fall off, it’s powered by a rechargeable Li-Ion battery, and delivers 450 flashers per charge. It’s compatible with Profoto Air, AirTTL, and Connect triggers too, so if you are already a Profoto user, this is an excellent Detachable camera flash to add to your collection.

A substantial light for a fraction of the price. Godox

Godox (or Flashpoint if you are buying from Adorama) has been a reliable and budget-friendly lighting option for photographers for a number of years now. And the Godox TT660 is no different. This light has built-in 2.4G wireless transmission, an illuminated LCD panel, and an automatic function to prevent flash overheat. Use it with the X1 TTL flash trigger to control manual output and fire remotely. It can shoot about 230 flashes on a full battery, features high-speed sync when it’s used with a wireless transmitter trigger up to 1/8000s. This one even comes with a set of gels to get even more creative with your lighting capabilities.

Q: Do all flashes work on any camera?

Some flashes rely on manual controls and only need a simple signal to fire. Those flashes will typically work with just about any camera. If you want any kind of automatic features or wireless transmission, however, you’ll want something built specifically for your camera.

Q: How long does a camera flash last?

The length of camera flash life varies depending on the brand that you are using. A camera flash that is loaded with fresh batteries will perform better than one with depleted batteries. More expensive flashes typically have a longer lifespan than cheaper versions. If you are shooting with flash it’s always a good idea to replace batteries before your shoot so that your lights are performing at their best.

It’s worth noting that you shouldn’t put old camera flashes on modern cameras. Without going too deeply into the science of it, you can destroy your camera if you attach the wrong kind of old speedlight to it. This typically only applies to flashes from decades ago.

Q: When should you use flash on a camera?

Use flash with your camera whenever you want to have more control over the light. Flashes are a popular tool for both indoor and outdoor photographers working in a variety of photo styles. If you are shooting during a concert or performance double-check the rules before you pull out your flash—bigger venues and performance spaces often have rules that specifically forbid flash photography.

Ultimately a detachable camera flash is one of the easiest ways to control the light and a lower-cost way to experiment than using studio strobes. A detachable flash is a must-have photography accessory when you are just starting out and building your gear collection. Learning to use a detachable flash will teach you a lot about the way that light works and how lighting conditions play a big roll in the aesthetics of photography.