For subscribers: He sold $1.1 million in art to high-end galleries and collectors. They were fakes 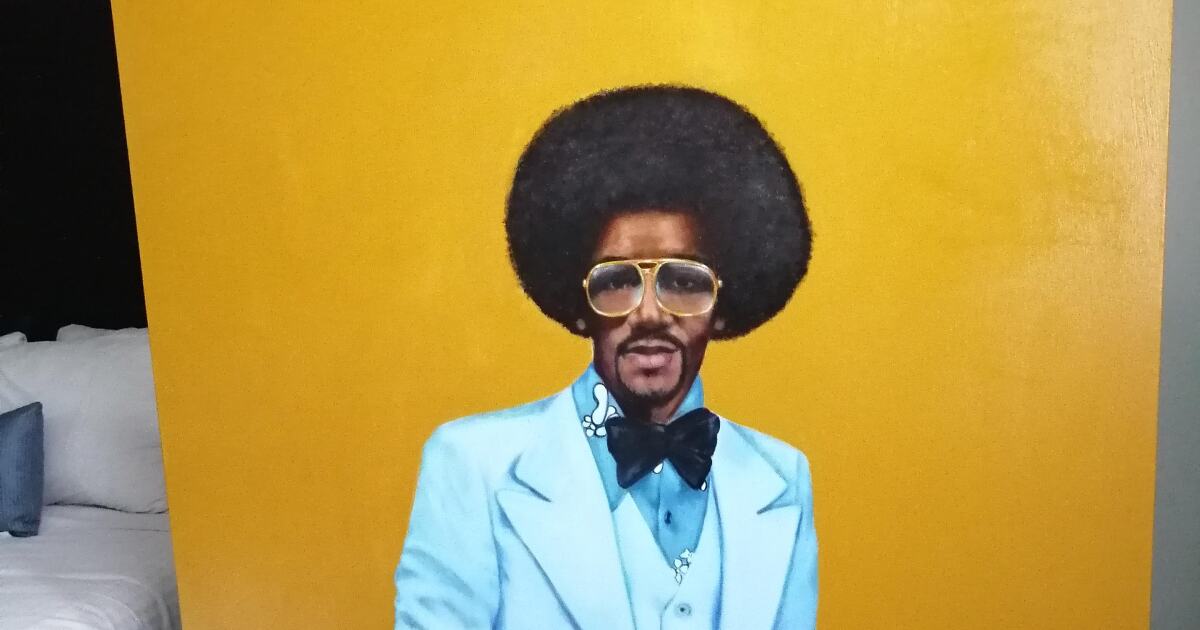 The provenance of the never-before-seen Barkley Hendricks painting — a stylish portrait of an African American man in a powder-blue suit, set against a monochromatic mustard background — was said to begin with a shared love of jazz.

“Story goes that Barkley Hendricks met my Uncle Larry at a garage sale that my uncle Larry was hosting in Mystic Connecticut or somewhere very close to Mystic in 1972,” the beginning of the provenance letter states.

The artist, famous for his 1970s portraits depicting the cool, fashion-forward confidence of everyday Black people, reportedly commented on Larry’s interesting outfit and his jazz records visible in the garage.

An agreement was eventually struck: The music collection for a personal portrait.

It would be a compelling origin story. If it were true.

The large-scale painting, which one New York gallery owner estimated would bring up to $2 million at auction, was uncovered as a fake, according to a criminal complaint filed in San Diego federal court.

The man behind the scam is Jason Alan Harrington, a 38-year-old Escondido resident. On Monday, Harrington pleaded guilty to one count of wire fraud. He also admitted to hoodwinking 15 prominent art galleries and collectors out of more than $1.1 million in other forgeries, according to the plea.

Harrington’s scheme involved creating paintings in the styles of famous artists and selling them as newly discovered pieces rather than known works. The 15 victims involved were not identified.

In addition to Hendricks, Harrington specialized in passing off forgeries of Richard Hambleton, a street artist who gained fame with his “Shadowman” figures in the 1980s.

This story is for subscribers

We offer subscribers exclusive access to our best journalism.
Thank you for your support.

Court documents don’t specify who is suspected of creating the faux paintings, or where.

How Harrington, a native San Diegan with a graphic art design background, became involved in art forgery is not entirely clear.

Harrington had racked up a low-level criminal record of drug possession convictions, failures to appear for court hearings and probation revocations. When he was arrested at the U.S.-Mexico border on March 21, agents found two credit cards in the names of others in his wallet and a photo of a fake Nevada driver’s license in his Google account, Assistant U.S. Atty. Andrew Galvin said at Harrington’s detention hearing, according to a courtroom recording.

“He went through a rough patch in his life, and he was taught how to do this by others,” his defense attorney, Jeremy Warren, said in an interview. “He feels bad for everybody involved and recognizes it was wrong.”

Forgery is an centuries-old crime plaguing art collectors and galleries worldwide. Countless art aficionados, both expert and amateur, have succumbed to the spell of obtaining works that end up too good to be true. But criminal prosecutions in the U.S. are rare, especially in San Diego.

“In all my years practicing here, I’ve never seen an art forgery case,” Warren told a judge in March.

Forgery of contemporary art — or works created by living or recently deceased artists — is a fairly new development in the art world, mainly because it is much riskier gambit, said Elisabeth Sann, a director at Jack Shainman Gallery in New York and the liaison to Hendricks’ estate.

Living artists can easily refute the authenticity of paintings, and the recently deceased still often have family and associates who are familiar with the artists’ catalogs and quirks, she said.

“I think this is something a lot of the contemporary art world isn’t used to,” she said.

Both Hendricks and Hambleton died in 2017.

Confirming an artwork’s authenticity is often a multipronged endeavor, sometimes producing results that are far from a sure thing. It involves establishing a history of ownership, inviting scholarly review of style and technique, and examining the materials forensically.

When it comes to antique and modern art, forensic evidence can include identifying the pigments historically used by an artist in a certain region or era, the age of the canvas or even patterns of fly droppings. Forensic exams prove more challenging with newer art.

But science wasn’t needed to unravel this con.

In September 2019, Harrington emailed a gallery that specialized in works by African American artists, asking whether it was interested in a Hendricks painting for an upcoming auction, according to the complaint. The gallery’s owner was interested and, in correspondence with Harrington, estimated the piece could fetch up to $2 million.

Hendricks, who was born in Philadelphia and attended Yale University, is featured in prominent museums, including the Whitney Museum of American Art in New York, the National Gallery of Art in Washington and Tate Modern in London.

In an email, Harrington told the gallery owner that the portrait was of his uncle, Larry Curry, and that Harrington inherited the painting years earlier.

He then went into the backstory: the garage sale, the jazz collection and the trade.

But when it came time for Hendricks’ widow to authenticate the painting, there was a problem.

In an email, according to court records, the gallery owner said the widow “doubted the materials, the technique, the handwriting on the verso and the signature on the painting. She said Hendricks began documenting all his painting in the late 1960s and took meticulous notes concerning each work. There is no mention of this work in any of his notes.”

She concluded it was a forgery.

“There are instances of people finding a Barkley Hendricks that has been sitting in their closet for 40 years, but there’s a record of it sitting in the [artist’s] studio,” Sann said. “It’s very easy for us to draw the lines and connect the dots.”

Photos taken in 2019 show the painting in various stages of progress. An unidentified man also appears in one of the photos; it is unclear whether he painted the portrait.

The subject of the portrait appears to be gleaned from a 1975 photograph of an unidentified man in a blue suit that was posted to a Wikipedia article about 1970s fashion, the FBI learned. The painting captures the man’s likeness down to his Afro, bracelet and pose.

The photo was also found on Harrington’s Google account, as was a screenshot of an online obituary for a Larry Curry.

Around the same time Harrington was trying to sell the Hendricks piece, he reached out to a private art dealer in New York about two Hambleton works, according to the complaint.

Hambleton, a Canadian artist, first drew attention in the late 1970s for his public “crime scene” art in which he would make chalk outlines depicting homicide victims and splash them with red paint on New York sidewalks. He then turned to his “Shadowman” figures on the sides of buildings and to gallery work, alongside contemporaries Keith Haring and Jean-Michel Basquiat.

His works are held in several prominent collections, including the Andy Warhol Museum in Pittsburgh and the Museum of Modern Art in New York.

Harrington was offering one supposed Hambleton for $15,000, a 72-by-62-inch work on unstretched canvas showing two black mirror-image silhouettes in a midair pose. He said the work was signed by the artist and dated ’09.

The second depicted a head-and-shoulders silhouette on a stop sign. It was offered for $20,000.

Harrington shipped the stop sign painting to allow the dealer to examine it, and she ended up purchasing it, splitting the cost with another collector and museum curator.

The letter of provenance claimed Harrington’s purported wife, Rachel, bought the art at a discounted price from Hambleton in 2011. She and the artist had become friends while living in Manhattan, so the story went.

After buying the piece, the art dealer hung it in a New York contemporary art gallery and listed the painting for sale on a website.

But an employee of the website became suspicious upon learning where and how the painting had been obtained, saying he had seen some strange Hambleton work coming from Southern California, the complaint states. The dealer scrutinized the piece more closely and determined it was counterfeit.

About the same time, Harrington contacted another potential buyer, described in court records as “a prominent art dealer, adviser and collector based in New York City” who “has been involved in the art industry for over 35 years.”

Harrington was hawking two more Hambleton pieces, one of a horse and another of three heads — both reportedly obtained at a low price through his wife’s relationship with the famous artist.

Harrington didn’t name a price but instead asked the dealer what she was willing to pay. He accepted an offer of $5,000.

One painting was shipped to the dealer — without a return label — for inspection. On first glance it appeared to be a legitimate work, she said.

When Harrington didn’t send the documents confirming the painting’s provenance, the dealer called him and asked to speak to Harrington’s wife. The woman on the phone introduced herself as “Jay’s girlfriend” and mispronounced “Greenwich Village” during the conversation, according to the complaint.

Suspicion mounting, the dealer reached out to one of the other Hambleton buyers, who took the paintings to a Hambleton expert who deemed the works fake, the complaint states.

The FBI investigation that followed revealed photos of several Hambleton-like paintings in progress, as well as publicly available photos of Hambleton that were used to doctor photos to make it seem as though Harrington’s associates had known the artist.

Harrington has agreed to pay more than $1.1 million in restitution.