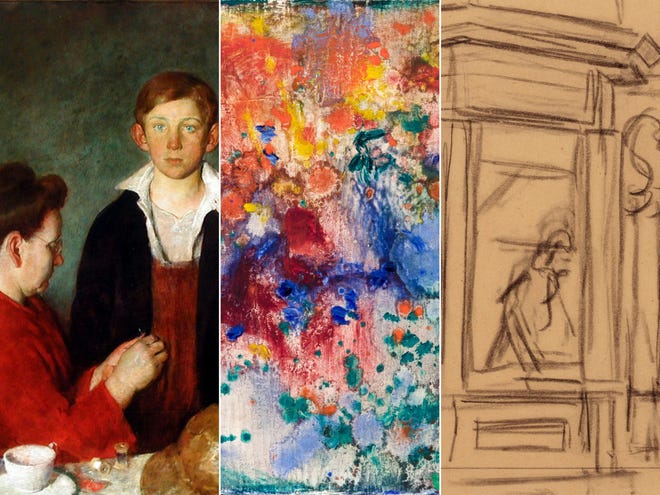 Songs, marshmallows at ‘Circle by the Sea’

“Circle by the Sea” will return for a 38th summer season for monthly campfire gatherings with music. The song circle will feature Karen Woodhall, David Jackson and Friends, and talent will be welcomed in an open-mic format. There will be toasting marshmallow-toasting, and guests are encouraged to bring a mask, beach chairs, flashlight, a piece of firewood, a non-alcoholic beverage, drums and instruments. Rain will cancel the event.

Where: Sandy Neck Beach, Route 6A, on the Sandwich/Barnstable line

The work and influence of two of Provincetown’s legendary art teachers will be the focus for Provincetown Art Association and Museum’s “Hawthorne, Hofmann and Hopper — Preserving a Legacy” exhibit. With works pulled from the museum’s permanent collection, the exhibit highlights Charles Hawthorne and Hans Hofmann as artists and teachers by juxtaposing examples of their work with that of some of their students. Work by artist Edward Hopper will also be showcased, but more of an influence on other artists than a teacher. In addition to these three masters, the exhibition will also include works by Edwin Dickinson, Robert Henry, John Noble, Lillian Orlowsky, Houghton Crawford Smith and Selina Trieff, among others.

When: Friday through Aug. 29

Cheer and eat barbecue as teams of two or four compete in an evening of friendly tournament-style competition during the Bocce & BBQ fundraising event for Heritage Museums & Gardens. The winner of the tournament wins free registration to the Bocce & Bellinis event Aug. 7. Proceeds from this fundraiser support museum  exhibits and educational programming.

Fireworks, parades, more: Where and how to celebrate the Fourth of July on Cape Cod

The Hyannis Public Library Multicultural Stories Series will continue with Maritza Nieves, a Puerto Rican singer, musician, poet and songwriter. An active member of Connecticut Storytellers, she works at private and community events, hospitals and schools.

Lennie Peterson is an artist and musician, including as trombonist for the band Entrain, who has synesthesia, a neurological condition that causes him to “see” music and translate the shapes, colors and images of that music onto his canvas or paper. The former professor at Berklee College of Music in Boston will be part of an afternoon open house for the exhibit “Synesthesia: The Music-Inspired Portraits and Mindscapes of Lennie Peterson” collection of art in many mediums at the Cultural Center of Cape Cod, then show his talent in an evening interactive presentation. Peterson will create a large composer portrait, accompanied by Wayne Naus on piano, then the two will join for a musical selection.

Want to see some Fourth of July fireworks? Where and when to go on Cape Cod

The first featured artist of the summer Eastwind Gallery will be Judy Lacava, who will also greet visitors on Saturday. Inspired by the ocean while walking her dog on the Cape Cod beaches, Lacava weaves fine silver around sea glass, shells and stones to create unique jewelry and works with wampum.

Payomet Performing Arts Center will welcome LADAMA in a concert that offers a fresh take on traditional, Pan-American rhythms and Latin Alternative music. The band is four women, musicians and educators from Brazil, Colombia, Venezuela and the United States. Members Lara Klaus, Daniela Serna, Mafer Bandola and Sara Lucas play traditional and non-traditional instruments to reimagine South American and Caribbean styles such as cumbia, maracatu, onda nueva and joropo and blend them with soul, rhythm and blues, and pop.

Roomful of Blues to perform at The Music Room

The Rhode Island-based Roomful of Blues band, which has been playing for audiences for over 50 years, will perform at The Music Room in West Yarmouth. The group has earned five Grammy Award nominations and various other accolades, including seven Blues Music Awards and twice being selected as Best Blues Band by the DownBeat International Critics Poll. The band’s latest Alligator Records release is “In A Roomful of Blues.”

The Kalliope Reed Quintet will kick off its 2021 summer season with a new concert program “Contemporary Americana,” including the world premiere of Daniel Baldwin’s “Seven Colored Earth” that will be featured on the group’s upcoming debut album. The program will also feature an arrangement of George Gershwin’s “American in Paris”; Jenni Brandon’s “Found Objects: On the Beach,” (inspired by Yarmouth’s natural landscape); and Becky Turro’s “Thaw” (inspired by the spring thawing of Acadia National Park). The professional New England quintet, founded in 2019, plans a summer season featuring eight world premieres across six concerts.

Harwich Town Band will begin its 2021 season with the annual Red, White and Blue Spectacular concert.

Cape Cod Museum of Art, celebrating its 40th anniversary, will hold an opening reception for its summer/fall historical exhibit called “cARTography: Envisioning Cape Cod.” The four-part exhibition includes a rare showing of historical maps of Cape Cod, on loan from the private collection of Orleans resident David Garner; two giant, restored art deco murals depicting an ocean voyage that were formerly on the walls of a Hyannis movie theater (and haven’t been seen in 50 years); “Our Story,” giving a Native American perspective to the exhibition; and an immersive installation by contemporary artist and cartographer Mark Adams.

Back in the picture: Restored 1930s moviehouse murals to be displayed at Dennis art museum

Admission: Free to the reception

For your event to be considered for Best Bets, contact Kathi Scrizzi Driscoll at [email protected]