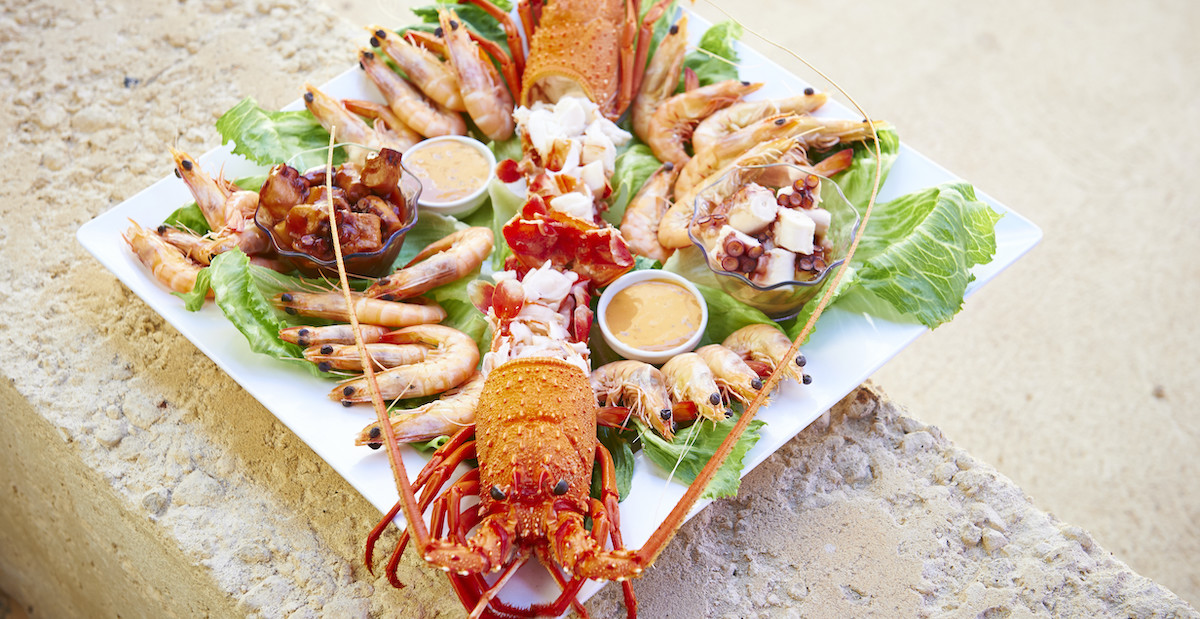 I took a list of must-try food experiences to England: high tea at Harrods, fish and chips at Rick Stein’s Cornwall, a London gastropub. I remember the ambiance of these places but not the food.

The only unforgettable food experience happened by accident. After a day of sightseeing, the kids were tired, so I ducked into a corner takeaway and returned with curry and chips. We ate picnic-style on the floor of our London bed and breakfast. Dunking chips into curry is a British thing and a novel combination we found charming.

When tourists come to Australia, they arm themselves with lists of must-try celebrity chef restaurants, famous wineries, and cellar doors. But this story is about the more common but unique food experiences, the Australian equivalents to curry and chips, you might miss out on if you only stick to your list.

As American as apple pie! But Australia’s hero is savory — flaky pastry brimming with a thick beef stew served with a dollop of “tomato sauce” (ketchup). Pies are part of our football culture in the same way hot dogs and baseball go hand-in-glove in the U.S.

Adelaide overturns the meat pie in a dish called “the floater:” an upside down pie floating in a thick pea soup. This pie tastes much better than it sounds. Try one at Café De Vili’s or on an Adelaide food tour. Some states bake Ned Kelly pies where the baker takes the pasty lid off and adds cheddar cheese, bacon, and cracks in an egg. Tasmanian bakers make scallop pies; puff pastry shells filled with whole scallops cooked in a rich curry sauce. In West Australia’s Kimberley, the pie might be a croc (crocodile) or barra (barramundi).

Pro Tip: In 2018, Malcolm Turnbull was photographed eating his pie using a knife and fork. His Instagram post divided the nation. Most Aussies eat a pie out of a paper bag.

Dim sim (known as dimmies) are deep-fried or steamed dumplings filled with pork, cabbage, and flavorings. Unlike the dainty Chinese version, the Australian dim sim is 3–4 times larger and has a doughier skin. The item now in fish and chip shops is thought to have originated with William Chen Wing Young for his restaurant Wing Lee in the mid-1940s. Another adaptation comes from a tiny stall in Melbourne’s South Melbourne Market where the Cheng family has been serving dim sims to long queues for the last 60 years. Their version is as big as a fist and laced with spices and pepper. Tourists can try South Melbourne dim sims at the Emporium and Queen Victoria Market in central Melbourne.

Pro Tip: Many Australians eat dim sims fried, but steamed is healthier. Eat them from a paper bag with a splash of soya sauce.

Despite what you have read so far, Australians are into clean eating. A Melbourne brunch at a trendy inner-city cafe is an experience not to be missed. Expect terms like GF, vegan, and superfoods stamped on every menu. Weekend brunches are social occasions with families or groups of house-sharing millennials. The standing joke is that millennials can’t afford to buy their own homes because they spend their deposit on smashed avo (avocado) on toast. Every cafe has its upmarket version. It could be avocado mixed with cashew feta, mint, and chili and served on organic sourdough or accompanied by a poached egg, spiced tomato salsa, pomegranates, fluffy tri-colored quinoa, and a wedge of burnt lime. Healthy sides are popular, such as kale, silverbeet, spinach, slow-roasted king oyster, or shitake mushrooms. Whichever way they stack your plate, your meal will be a work of art.

I can feel myself getting into hot water here. But Australian coffee culture is just so damn good. Australians never took to Starbucks, and most stores closed here. As Oliver Strand wrote in the New York Times,  “Those who nerd out on coffee know that Australia — Melbourne in particular — has a dynamic and professional coffee scene.” Melburnians prefer 100 percent arabica, and many cafes roast their own beans. Baristas only look up from creating latte art long enough to make eye contact with a customer when their creation is delivered to their table. In any Australian city, you’ll find lists of recommended coffee experiences. Or ask a local!

Pro Tip: Many Australians are so nerdy about the coffee they travel with the Beanhunter app, which ranks coffee worldwide.

You say cookie, we use the English term biscuit. A Tim Tam is two malted chocolate biscuits sandwiched together by chocolate icing and then dipped in more chocolate. To do the Tim Tam slam, nibble off diagonally opposite corners, then use the biscuit as a straw to suck up a hot drink. When the warm liquid reaches your lips, you have three seconds to slam the biscuit into your mouth before it disintegrates. A party in your mouth of pure molten chocolate bliss. Here are instructions for the Tim Tam Slam.

Pro Tip: Packets of Arnott’s Tim Tams are available at our supermarkets for a couple of dollars and make a great gift.

A vanilla slice is when bakers set creamy yellow custard between two layers of flaky pastry and top it with a shiny fondant icing. Victorians prefer vanilla icing, passionfruit in New South Wales, and Queenslanders lean towards pink. The last winner of the Great Australian Vanilla Slice Triumph was Bridgewater Bakehouse. Yes, we make it a competition.

Lamingtons are squares of sponge cake coated in syrupy chocolate. A final coating of coconut makes them easier to hold in hot weather. As a child, I watched my aunt bake them. She was a member of the CWA (the Country Women’s Society ) who pride themselves on their cooking. Because she needed an even dozen for a cake stall, she refused to let me have one. As soon as I was old enough, I bought one at a bakery. Lamington drives are common school fundraisers. Here’s the recipe.

During WWI, women baked oat and golden syrup biscuits to raise money for the war effort. They became known as ANZAC biscuits. These chewy, buttery delights are an Australian icon and easy to bake.

Australia and New Zealand squabble over who invented the pavlova. The airy light dessert was named in honor of the Russian ballerina Anna Pavlova, who toured both countries in the 1920s. The base is a large meringue loaded with fresh whipped cream and piled high with fruit. Here’s a recipe. A Christmas pavlova has red berries and green kiwi fruit. Try a “pav” at iconic places like Melbourne’s Hopetoun Tea Rooms.

Bush tucker is native fauna/flora used for culinary purposes and sustained Indigenous Australians for an estimated 60,000 years. My first bush tucker experience was in Alice Springs 20 years ago. Meats such as crocodile, emu, and kangaroo were then a novelty. Born into the generation that grew up watching Skippy, I struggled with the concept. Today kangaroo meat is sold in supermarkets, and specialist butchers sell emu sausages and crocodile steaks. These meats are a healthier and leaner alternative than the mutton and beef I grew up eating. The interest in indigenous food is shifting to foraged or harvested foods such as Anise Myrtle, Bush Tomato, Davidson Plum, Finger Lime (the caviar-textured seeds explode in your mouth), Kakadu Plum, Lemon Aspen, Lemon Myrtle. Mountain Pepper, Muntries, Quandong, Riberry, and Wattleseed. When seeking to try these items, support food businesses where the money goes back into indigenous communities. Here’s a good list.

Damper is bushman’s bread baked in the coals of a campfire using only flour, water, and salt. Today, along with billy tea, it’s often part of a tourist experience. My last damper was at Smithys, Longreach, Outback Queensland, and it came hot from the fire smothered in golden syrup. Modern damper is increasingly married with bush tucker. On the Ghan, I’ve eaten it with pepperberry butter and Davidson plum chili preserves. Melbourne’s Attica damper comes with wattle seed and accompaniments of churned butter, macadamia cream, and saltbush.

85 percent of Australia’s population lives within 31 miles of the coast. Seafood names differ from the U.S. When Paul Hogan said, “throw a shrimp on the barbie,” for U.S. audiences, Australians scratched their heads. In Australia, the word shrimp means something undersized. Shrimp might be used in a sandwich or hidden in a seafood cocktail. Everything bigger is called a “prawn” and described by species: e.g., king prawns, tiger prawns, banana prawns, etc. They are huge and worth throwing on the barbie. Australia’s prized fish is barramundi which is mild, sweet, and succulent. Australia has three of the top 10 most popular oysters: Sydney rock oysters, Tasmanian oysters, and Coffin Bay oysters. Don waders and eat shucked oysters straight from the sea. We have numerous upmarket seafood restaurants, but seafood in Australia doesn’t have to come “posh-plated” — there’s joy in a “bucket” of prawns at a local surf club or sharing a fish and chips picnic on a sunset beach.

We would never claim the burger, but the “burger with the lot” we like to consider ours. This toppling stack has a burger patty, fried egg, bacon, cheese, lettuce, tomato, onions, pineapple, and beetroot, making it a challenge to get your mouth around. Beetroot is the item that puzzles tourists. But it’s cold and sweet and marries well with the hot meat. McDonald’s sometimes offers a “McOz” with beetroot as a promotional item.

Vegemite is an Australian spread made from brewers’ yeast extract. It’s the same color as chocolate, but don’t dip your spoon in, or your tastebuds will reel. Vegemite is salty and best eaten smeared finely on hot buttery toast. Or buy a Vegemite scroll from a bakery. Australia is such a multicultural society that most of us are far more likely to have eaten a kebab, a pad thai, a bowl of Vietnamese Pho, or a McDonald’s burger in the last week than to have reached for our jar of Vegemite. But as Vegemite is forever associated with Australia, we’ll happily make you a Vegemite sandwich.

Australia is a vast country, and there are many unique and exciting adventures to experience: